By AudioFetch | Fitness Centers | No Comments

It’s easy to believe that music does its own part to help make a workout be more enjoyable. Most people, however, might be surprised that there is science to prove that music improves exercise endurance by stimulating physiological responses. That’s right, music is just as important to maximizing the potential of a workout as stretching and proper hydration.

Music As A Performance Enhancing Drug

That is exactly how Brunel University’s lead researcher, Costas Karageorghis, described music’s relationship to working out or competing. The studies performed on the psychology of music in exercise concluded that those who listened to tunes had higher levels of endurance, experienced less fatigue and enjoyed better metabolic efficiency. The combination of emotion inspired by song association, the cadence of the lyrics and rhythm of the music have a stunning effect upon the heart rate. Bikers pedal faster, runners pump their legs more powerfully, a stroll can quickly become a sprint. This happens due to what researchers call the “rhythm response”.

This effect of music upon exercisers was first noticed in 1911. Since then interested psychologists, inspired by this relationship, have performed various studies. It is clear to medical experts that it is instinctual for the human body to attempt to synchronize its own rhythms with that of the music it is hearing. If you want to get the most out of your workout keep in mind that songs that have about 120-140 beats per minute (BPM) will maximize the potential of a cardio workout.

To take your workout further, the Brunel studies suggest music can help to increase endurance levels by as much as 15%. Integrated into London’s half marathon, aptly named “Run To The Beat”, music was the primary feature of the race. Music along the route was selected to maximize the performance potential of the participants.

Getting The Right Beat

Catch up with the science and contact us for the premier service on the cutting edge of technology and exercise–wireless audio streaming equipment. Get the right beats and perform to your highest potential.

How to Run Ads Through AudioFetch’s Ad Portal

When you make the smart decision to install AudioFetch in your business, whether it’s a sports bar, house of worship, fitness center, educational facility or any other venue, you are provided with an added benefit to help further promote specials or events at your business.

Each AudioFetch customer is able to place ads or graphics within the app for free. Any guest at your business using AudioFetch will see the ads at the bottom of the app screen. You can direct users to your website or social media channels, include notifications about discounts or special events, add an email address or phone number for them to connect with you, or near innumerable other options. 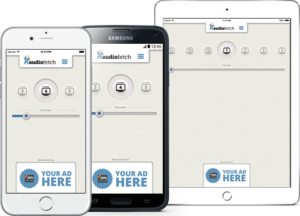 It couldn’t be simpler to add these ads or graphics to your app! Just follow the steps below:

Not sure what to include in your ads? Below are some ideas for different types of venues: 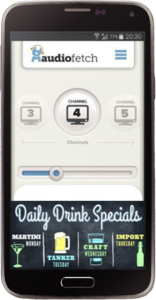 If you need to confirm your login credentials for the ad portal, please call 888.330.4283, extension 3. And if you have other questions about taking advantage of this ad space, please don’t hesitate to contact your AudioFetch representative.